A large tourist investment that comprises an 18-hole golf course, support facilities, hotels, luxury homes, and a holiday village of up to 600,000 sqm was approved by the Enterprise Greece BoD and is going to the inter-ministerial committee for strategic investments in order to be included in the Strategic Investment Process with the tool of the framework of the Special Spatial Development Plans for Strategic Investments (ESCHASE).

The project will be developed in an area of ​​approximately 6000 acres that belongs to the Holiday Houses Cooperative Association of Health Workers, "The HYGEIA" in Saronida. The development of the project will be deployed by VITA DEVELOPMENT company.

The project, in which the Cooperative Association participates with a percentage of 60-40%, will offer a solution to a stalemate in the property's use since 1968, when the association was founded to provide housing for its approximately 3000 members. The Association was basically trapped after the adoption of the 1975 Constitution, when for the first time the protection of the natural environment was guaranteed, prohibiting the change of use of forest areas, except for reasons of public interest, which do not fall under a residential development.

The large tourist investment, which is estimated at € 700 million, is expected to upgrade the area as a whole, contributing to the overall upgrade of the coastal zone in Attica known as the "Athenian Riviera", in which investments of over € 2.5 billion have been planned so far. of € 8 billion of Elliniko. 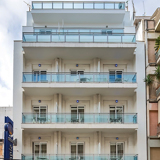